There seem to be very few teams throughout the history of professional sports that have experienced the fall from grace the way that the Pirates have.  And I’m not just talking about missing the playoffs for a few years in a row, or not making it to the World Series.  There are teams with longer World Series droughts than the Buccos 32 years (Indians 63 years, Padres, Rockies, Astros, Rangers and a few others, never).  I’m talking about the fact that it has been nearly twenty longer years since the Pirates have won more games than they lost in a single year.  Nearly two decades since they have finished with a winning percentage above .500.  The closest they have come was in 1997, when they finished 79-83, a mere 2 games away. 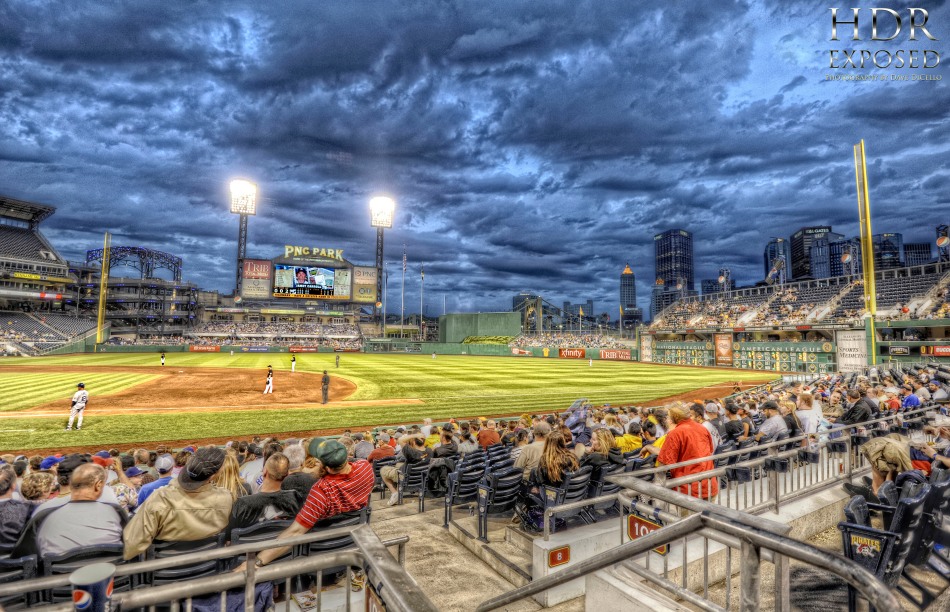 There seemed to be a slight glimmer of hope this year, as they have hovered around the .500 mark for most of the year, and that’s where they were the night that I attended this game.  However, they got stomped 10-3 at the hands of the Dodgers, and then were shut out again last night.  The problem with the most recent Pirates teams is they have no star power, no game changers, no one who is really dangerous.  They have young players who show a lot of potential like Andrew McCutcheon, Neil Walker and Pedro Alvarez, but chances are they will not win you a World Series.  Pirate’s ownership has said that when fans start coming to games they will invest more money in the team.  Well that’s a catch 22, because if they don’t field a competitive team, you aren’t going to get many people to come to game.  While I am not a huge fan of the salary cap in other sports, I think it would be the only way (under the current management) for the Pirates to start winning again.

Anyways, on to today’s shot.  I have a bunch to post from the game, but I wanted to start off with this one.  The seats we had were pretty good, about ten rows off the first base line, which afforded me some great picture opportunities.  I took this one a little bit later in the game, when some clouds had rolled in and the blue hour was upon us.  PNC Park is a beautiful stadium, especially with the view of the Pittsburgh skyline in the distance, which is what I was trying to capture with this shot.

This is a 5 exposure handheld HDR that I processed in Photomatix.  I actually had originally taken 7 brackets, but the -3 and -2 exposures were a bit too dark, so I ended up using the -1 to +3 range.  I tonemapped the +2 exposure to mask in the entire crowd, as you can imagine no one was kind enough to sit still while I took these.  I also used the 0 EV exposure to mask in the players on the field and the coaches, as they were just shifting a tiny bit.  The last mask I added was over the scoreboard so it looked crisp and clear.  I added a curves layer for the blues and greens to help bring out the sky and the field respectively, and also added a Tonal Contrast and Pro Contrast filters in Color Efex.  Logo added, good to go.

More Buccos shots coming tomorrow.  Make sure you stick around.